Your new home for car and truck enthusiast to share, learn, and brag.

This section allows you to view all posts made by this member. Note that you can only see posts made in areas you currently have access to.

August 20, 2016, 09:20:32 pm
well since i think i plan on keeping this thing i figure i should start a thread for it. on sunday i check out this 89 RC and on tuesday i was dragging it home. it needs a good cleaning but is pretty solid for a vehicle around here. so far i have washed it off, replaced some brake lines and got it running fairly reliably but still got a bit more work ahead of me. i still have to replace the fuel pump, windshield, tires, fuel lines and who knows what else. i don't have my plans for it 100% worked out yet but the main goal is to get it back on the road so that i can enjoy it for the rest of the summer.  current setup is 318/727/NP241/3.21 on 33's. only thing that might change is the 33's. i might cheap out for the time being and run the old tires off my 93 ramcharger which will look a bit funny but keeping the cost down until get it to where i feel a bit more comfortable spending good money on it
2

July 07, 2014, 01:58:43 pm
ok i am looking at motor mounts. the passenger side motor on my truck has pretty much failed. every time i am driving down the road my truck has a funny vibration that is only there when i let off the gas. it disappears when i touch the gas. i have known it was going for a while since i drive my truck pretty aggressively in reverse and the bang of the motor mount is un-missable when i am backing up. so i am wondering if i could run diesel motor mounts? they look like they might be a bit taller but otherwise the same but heavier duty. anyone ever try them? i really don't want to be replacing the cheap motor mounts every 3 years or 20,000km's. i know my truck is a torque monster and all but this is pretty ridiculous. thanks
4

April 22, 2013, 06:28:45 pm
i just  figured it was about time i started my own thread for the ramcharger. it has come a fairly long way since i got it but has a even longer way to go if i plan on keeping it. the money i was planning on spending on fixing the plenum gasket and getting better gas mileage may end up getting spent on sheet metal this week.
a picture of when i first got it

one of my favorite mods. it is so nice to know the outside temp plus having the extra lighting is nice. 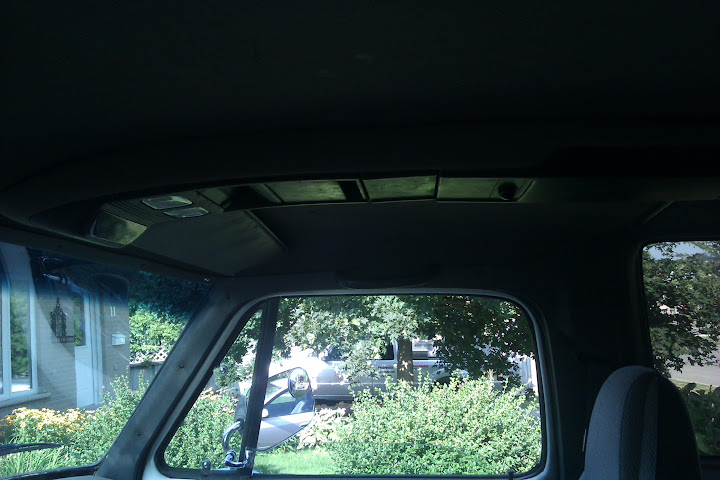 this shows that extra lighting/led light upgrades i did. 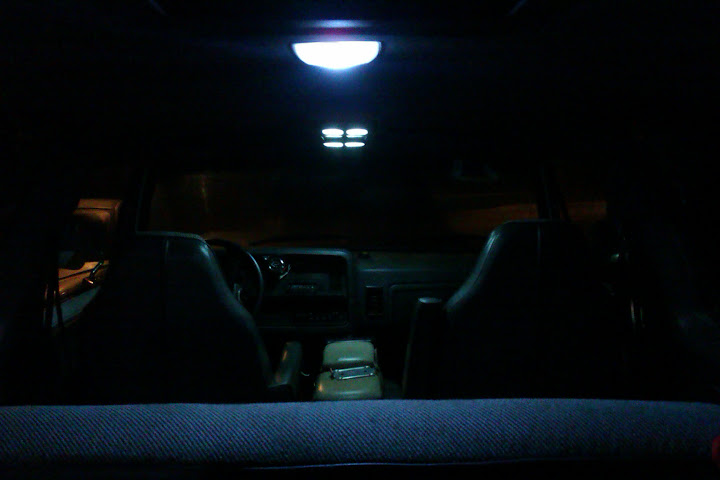 another one of my favorite upgrades was the backup lights. i can see pretty much everything when backing up. 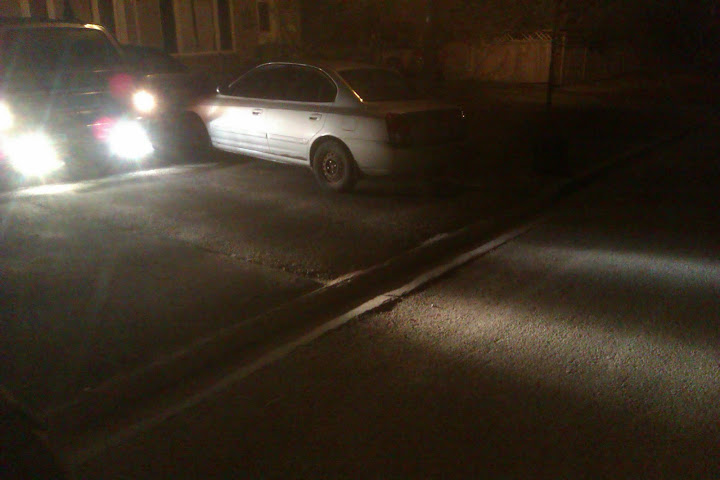 now the next project. this is why i wouldn't mind getting a ramcharger from down south. 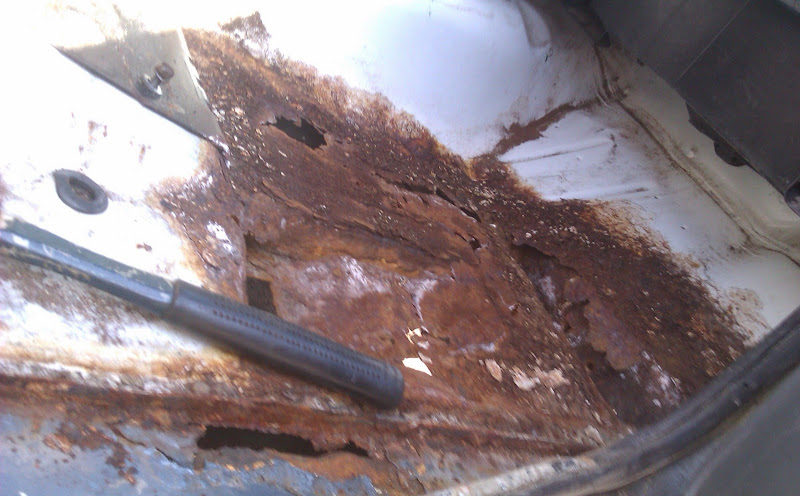 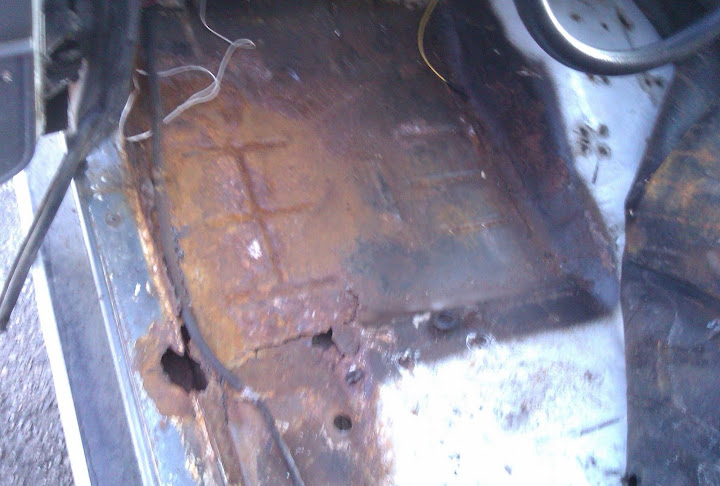 December 19, 2012, 05:50:57 am
these were posted over on dodgeforum. i figured i would share. the service manual would have to be downloaded to be viewed but the parts manuals should be able to be viewed online

October 28, 2012, 07:30:26 pm
i was wondering if anyone else has googled ramcharger lately? this place came up number 10 in my search results. that is bottom of page 1. that is pretty good since last time i google it i think this place showed up on page 2.
7

October 08, 2012, 02:36:39 pm
i was wanting some other peoples input on this crack in my rad support. i noticed it a while ago but never thought much of it till today when i notice it had started opening up a bit. was thinking of sandblasting, drilling then welding it up but i was not sure if it will crack again or even why it cracked. i know the supports at the bottom are pretty rusty but didn't think that would hurt it. other option would be to buy a used rad support. managed to find one out of a 84 and the guy is asking $100 but i have no clue what shape it is in. i was wondering what other people thought. also could swap rad supports with my 91 but really like the look of the 81-85 grille. 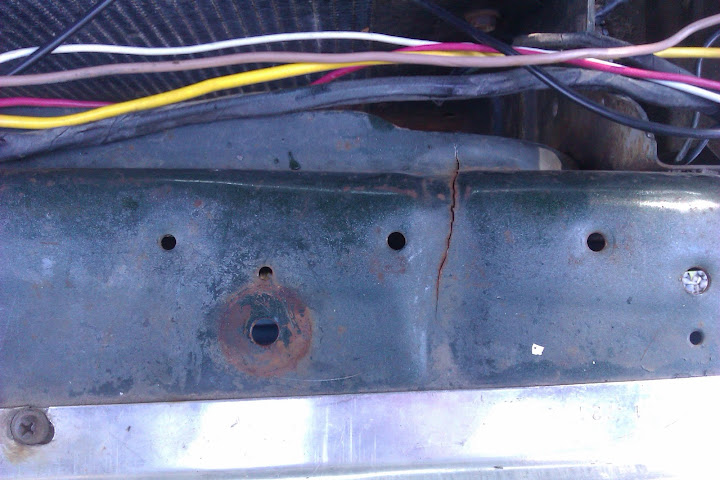 August 13, 2012, 05:59:42 pm
i thought i would start a thread about my 81 since i have done so much to it and i figured some of you might be interested in some in some of the mods.
here is what it looked like when i first got it. for the most part it looked fairly good but it had it fair share of rust and pealing paint. someone had painted it and done a not so good job. 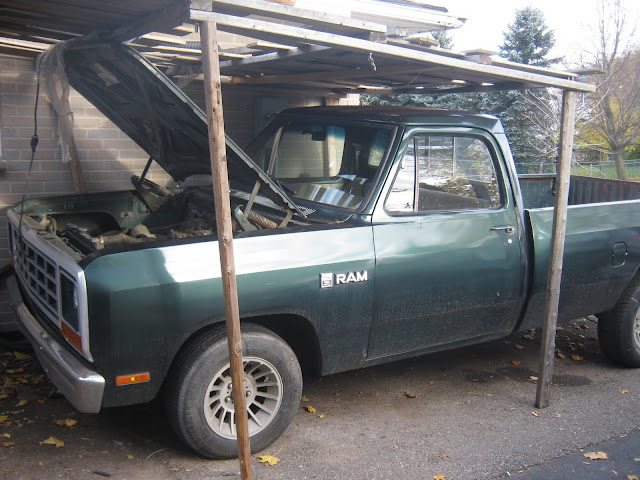 under the hood sat a 318 out of a 85 with the intake off a 77 with a 650 Holley double pumper. it also had an accel coil and wires but the coil was very flaky. would never run right so i replaced it with a stock one and never had a problem to date. i ended up being given a 570 street avenger that i installed and am still running. 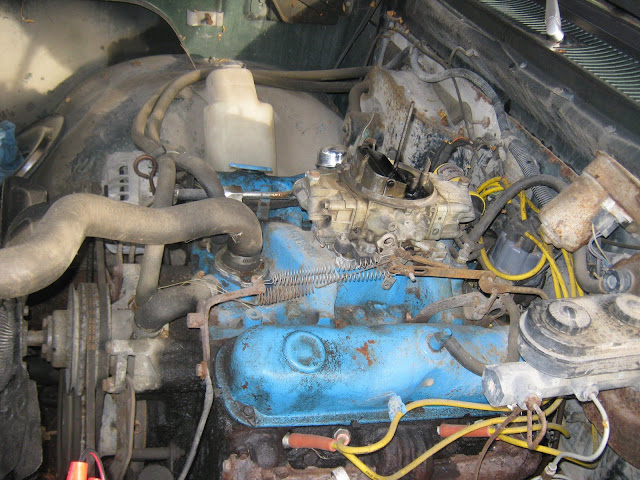 i spent many hours sandblasting and and doing metal work with my dad to get it on the road. it required 2 front cab mounts and a bit of cab support. otherwise it was not too bad. had to do some basics like replace almost every brake line, 1 caliper, 1 rotor, the pads on one side. it looks like someone had installed all brand new brake parts on the one side but forgot to bleed the caliper so there was no wear at all. just a bit of rust. i also had to shorten some park brake struts off a newer dodge to fit the rear brakes. for some reason those where missing. put brand new tires and a center link on it and it was ready to drive about a month before my birthday and 1 day before i would loose a 10% discount on insurance.

well after i had it on the road for a bit i started cleaning up under the hood so i sand blasted the valve covers and painted them mopar blue.

painted and installed they look good but i was a bit unhappy with how the new paint made everything else not look so good. 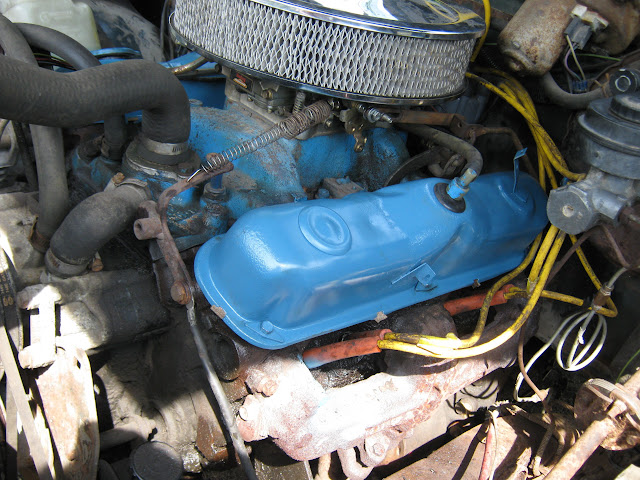 so i spend another day sandblasting and painting the exhaust manifold. the only thing that sucks is that the cheap paint i used did not even last a year but it did look good for a short time. next time i will spend some extra money on the good paint. also would you believe my exhaust manifolds had no gasket when i took them off? put them back on the exact same way and didn't leak a single bit. i also took some video footage of it running with the exhaust manifold off.
http://www.youtube.com/watch?v=BPRG_BsGYKU 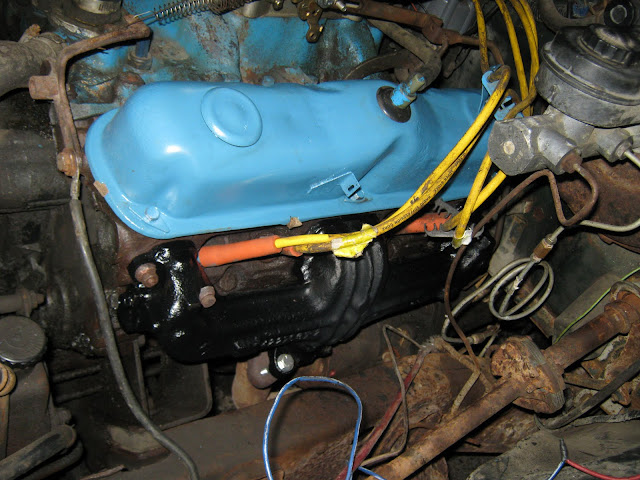 not too long after i ended up picking up electric fans and a power distribution center out of a 2000 dodge caravan for $40 and the guy even took them out for me and gave me plenty of wire on the PDC to hook it up. 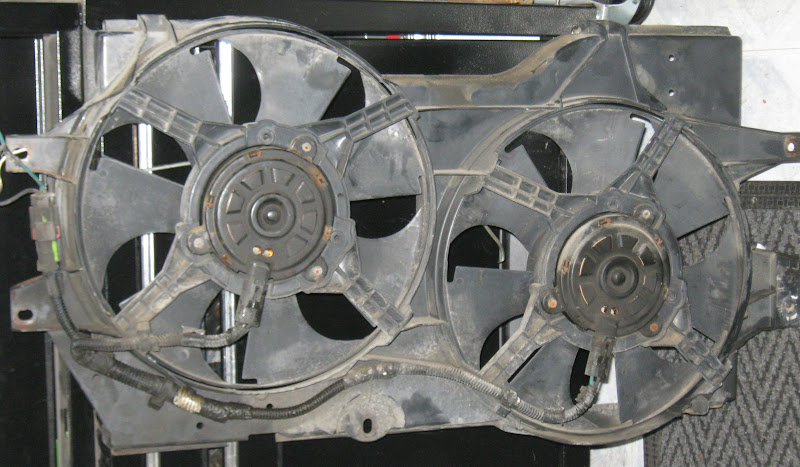 more fuses and relays than i think i will need but having extra can not hurt.

heres what the fan looks like installed. fits the rad pretty good width wise but is a bit short height wise but it pulls air through the top which is what gets the hottest. 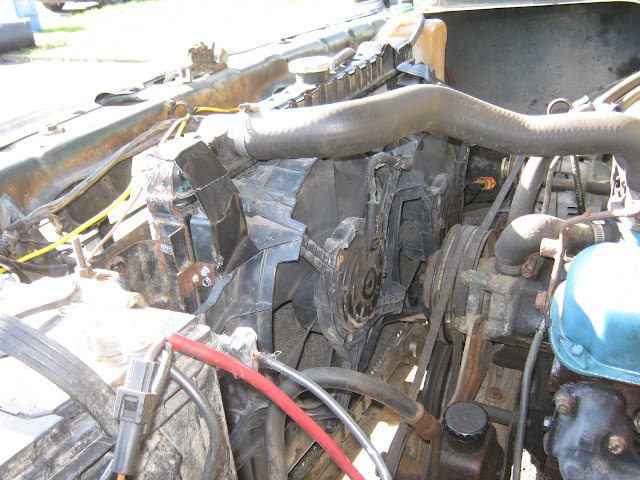 just used a tiny bit of angle iron to hold it to where the fan shroud should have been. 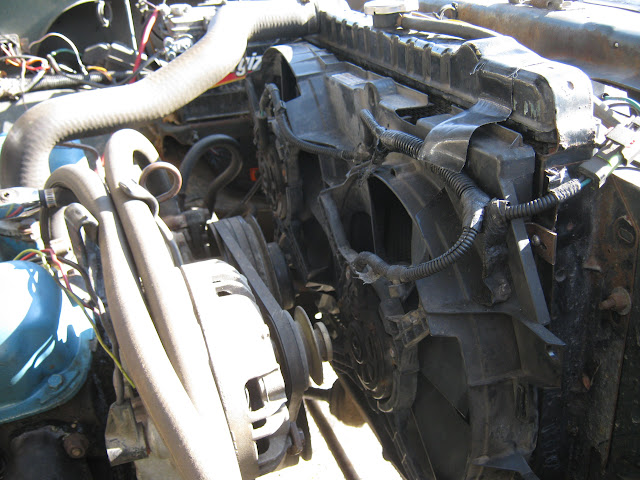 heres the power distribution center kind of installed. currently the only thing i have hooked up to it is the starte and electric fans. i am planing on hooking other things like the headlights and everything else but have not got around to it yet. 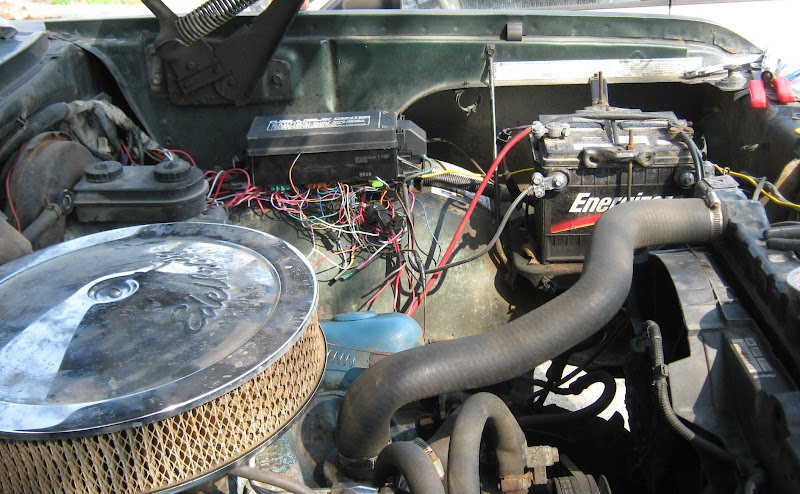 if you have any questions just ask. i will try to answer them the best i can.
Pages1